In the latest of our Artist Profiles we ask Jonny Duddle about his life and work. Jonny’s books have sold over a million copies worldwide and his events dressed as a pirate are legendary, having spent a year on board a real ship climbing the rigging he knows all about life on board a square rigger and he has created a world of stories based on a lovable pirate family, the Jolley-Rogers and their exploits with landlubbers. The Jolley-Rogers’ son Jim Lad and his friend Matilda are currently being animated by Cyber Group and with a fair wind will be on our screens as a TV series. Jonny is creating new adventures for the friends with his wonderful witty writing and his amazing drawings and lively imagination. All round super illustrator and writer… 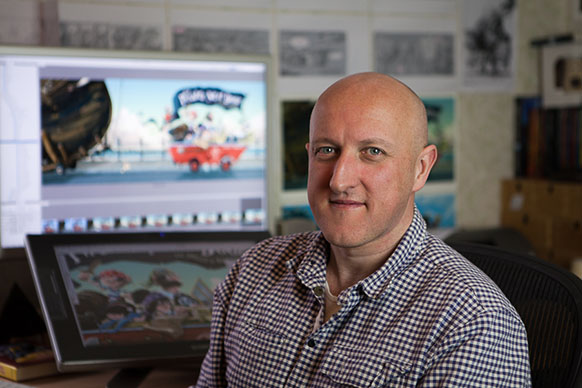 What can you see out of your studio window?

I can see the scruffy outbuilding that I really want to be my studio, but it’s full of car parts and needs new doors and windows and a new roof And beyond that, I can see lots of trees and some nice Welsh hills.

Which three tools of your trade could you not live without?

Have you read any good books lately?

‘Show Me a Story: Why Picture Books Matter’ by Leonard S Marcus is on my bedside table. It’s a series of interviews with authors and illustrators, including Maurice Sendak, Quentin Blake and Eric Carle. It’s fascinating and an inspiration.

What’s the funniest thing a child has asked you at an event?

“Have you ever killed someone and drank their blood?” It was a cute little kid that asked me that. He had a pirate outfit, with a plastic sword. It was just after I showed some photos of when I used to be a pirate. I think he thought I was lot meaner than I really am, and he obviously didn’t know I was a non-meat eater. 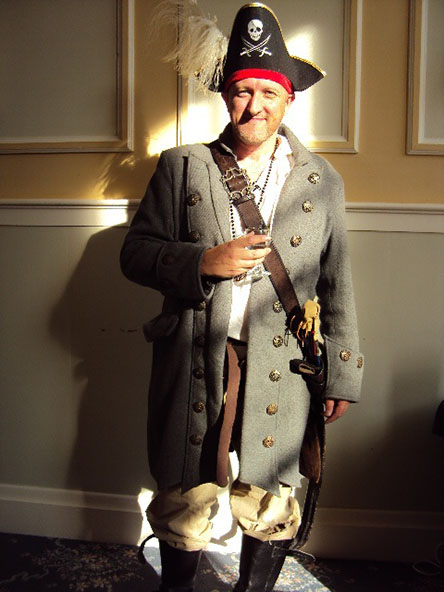 Which of your books are you most proud of?

I’d wanted to have my own picture book published for many, many years before ‘The Pirate Cruncher’ arrived in 2009, and I had lots of rejections from publishers and agents when I first sent out stuff in the few years after university, so receiving my first real copies was massively exciting. And a lot happened while I was working on the book, including losing my Dad, so I was proud to get it finished, and just wish he’d been around to see it. 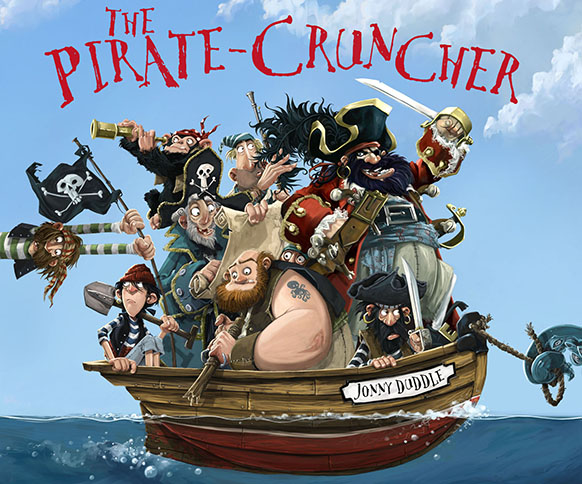 Hook hand. As long as it was my left hand. And I could change attachments. Like a Swiss Army hand.

Have you ever thought of changing your name to Jonny Doodle?

I used to sign my work as Jonny Doodle when I was at school and University. But then I was a bit tiddly one night, and a ouija board told me not to. So I did as I was told. And I figured that Duddle was a silly enough name, and people could make their own connection to ‘Doodle’. After I won the Waterstones Children’s Book prize, somebody phoned my agents, Arena Illustration, and asked what my real name was. So, Jonny Duddle is probably a silly enough name for a children’s book writer. 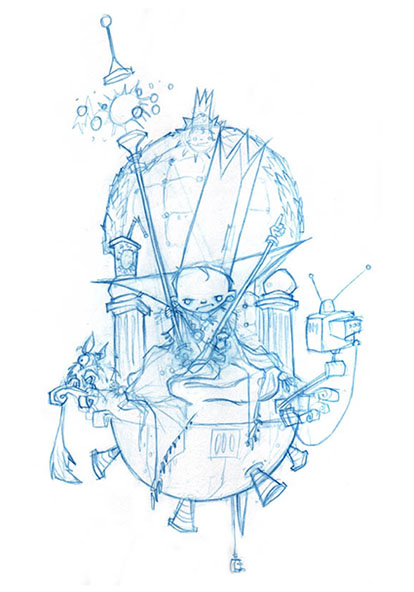 When you are left entirely to your own devices and without having to censor your work in any way, what do you prefer to draw? 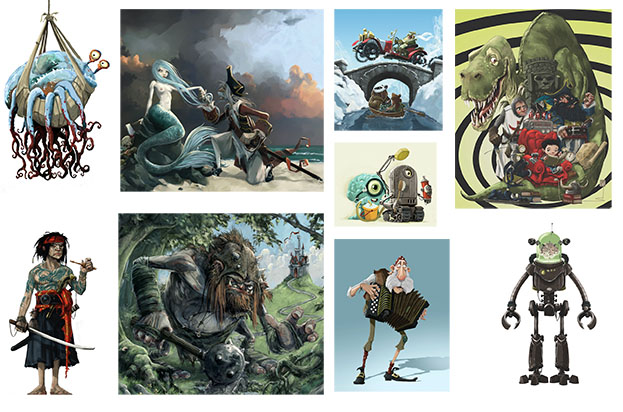 Your work looks traditional and painterly but I think it’s done on screen. What is the approach you use and how did you reach that decision?

I work almost entirely in Photoshop and Painter on my 21” Wacom Cintiq. I work in a bit of a painterly way, with a similar process to oils or acrylics, but entirely digital. I make drawings with either pencil (which I then scan) or with a pencil-like brush in Photoshop. The benefit of the Cintiq is that I’m drawing on the screen, which feels much more intuitive than a normal tablet. Next, I do an underpainting, either in monotone or blocks of colour, and then start developing a more finished painting over the top.

The big benefit of working digitally is that I don’t have to have a fully worked-out drawing when I start painting. I can constantly change elements in the illustration as I work, even making significant compositional changes or tweaking colours as I go along. Which lets me just get stuck in and have fun without too much worry about messing it up. The downside of that is that there’s always room for more fiddling, and it’s harder to call an image ‘finished’.. 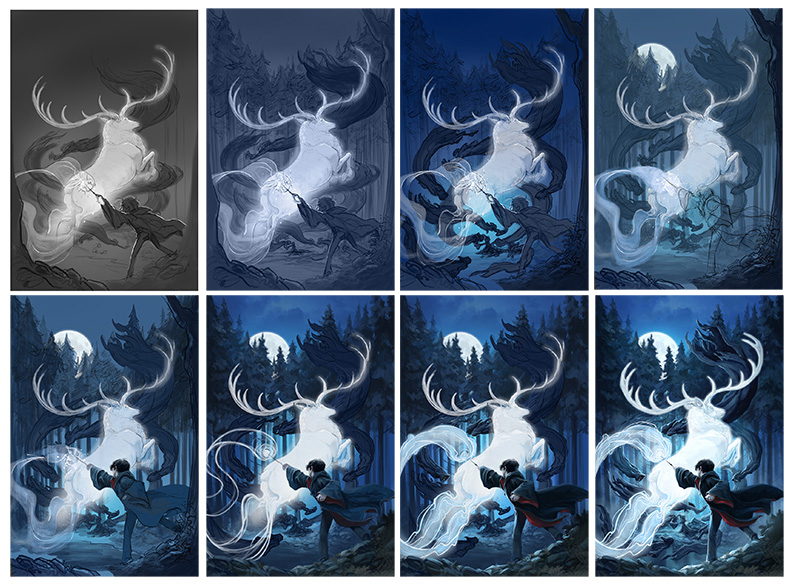 Work in Progress Prisoner of Azkaban

What does your sketchbook look like? Is it a total scribble scramble or is it a neat, clean arrangement of finished drawings?

My sketchbooks aren’t used enough. I don’t get out much, so don’t get to sit on trains and buses with my sketchbook in hand, like I used to when I was a games artist. I don’t sit in cafes and museums much either. If I get to an art gallery or museum, I’m usually chasing my youngest daughter around to make sure she doesn’t break anything. I’m always at home and seem to be busy most of the time doodling proper jobs on the Mac. A lot of my experimenting takes place on the pooter, and I have lots of files stashed away. But I’m making a conscious effort to do more drawing, and to use pencils, paints and paper. I’m feeling a little jaded from years leaning over my Wacom Cintiq, and I’m missing the smell and tactile nature of paint and ‘real’ media. And it’s nice to look through old sketchbooks, remembering when and where you did a drawing. But back to the actual question, my sketchbooks are a bit of a mish-mash. 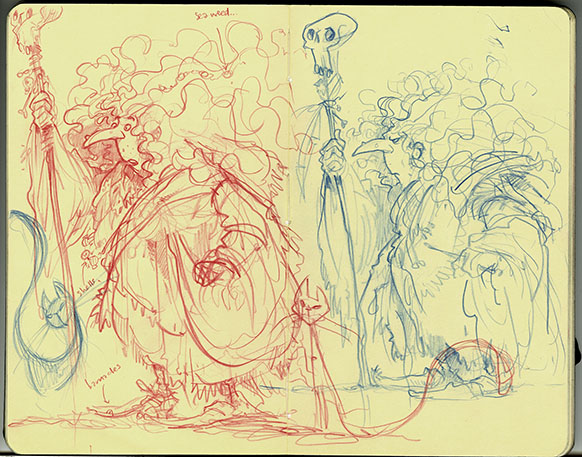 Which 5 things would you take with you if you were abandoned on an island by a bunch of unruly Pirates?

A fishing rod, a barbecue, a case of wine, a big sketchbook and a box of pencils

For more information on Jonny’s work on the Harry Potter book jackets head over to Bloomsbury’s page here.