On September 1st the new editions of the Harry Potter books will be in the shops for a new audience of children to enjoy. Jonny Duddle has been in the privileged position to capture the magic of these classic children’s books and we’re now able to show you the last four covers in the series.

Jonny was interviewed for MuggleNet where he explains a bit about his process and how he landed the job which has consumed his time for the past seven months.

Here you can read the brief that was given to us by our art director Val Brathwaite from Bloomsbury for each of the jacket illustrations and see just how well Jonny has interpreted that written brief into magnificent illustrations. 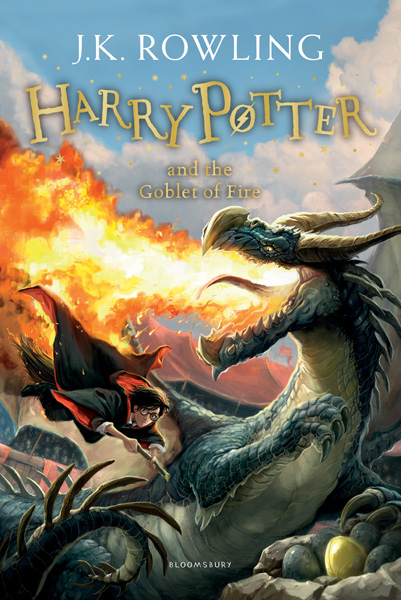 Harry Potter and the Goblet of Fire

Harry Potter and the Goblet of Fire

Harry flying on his broomstick as he completes the first task of collecting the golden egg, with the Hungarian Horntail dragon rearing and breathing fire.

“Harry rose a few more feet, and she let out a roar of exasperation. He was like a fly to her, a fly she was longing to swat; her tail thrashed again, but he was too high to reach now … she shot fire into the air, which he dodged … her jaws opened wide …

‘Come on,’ Harry hissed, swerving tantalisingly above her, ‘come on, come and get me … up you get, now …’

And then she reared, spreading her great black leathery wings at last, as wide as those of a small aeroplane – and Harry dived. Before the dragon knew what he had done, or where he had disappeared to, he was speeding towards the ground as fast as he could go, towards the eggs now unprotected by her clawed, front legs – he had taken his hands off his Firebolt – he had seized the golden egg ” 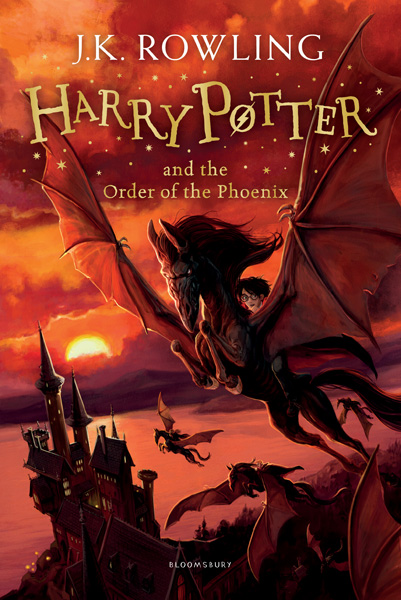 Harry Potter and the Order of the Phoenix

Harry Potter and the Order of the Phoenix

Harry, Ron, Hermione, Neville, Luna and Ginny flying Thestrals away from Hogwarts in the sunset.

“For a moment Harry’s Thestral did nothing at all; then, with a sweeping movement that nearly unseated him, the wings on either side extended; the horse crouched slowly, then rocketed upwards so fast and so steeply that Harry had to clench his arms and legs tightly around the horse to avoid sliding backwards over its bony rump. He closed his eyes and pressed his face down into the horse’s silky mane as they burst through the topmost branches of the trees and soared out into a blood-red sunset.

Harry did not think he had ever moved so fast: the Thestral streaked over the castle, its wide wings hardly beating; the cooling air was slapping Harry’s face; eyes screwed up against the rushing wind, he looked round and saw his five fellows soaring along behind him, each of them bent as low as possible into the neck of their Thestral to protect themselves from his slipstream.

They were over the Hogwarts grounds, they had passed Hogsmeade; Harry could see mountains and gullies below them.” 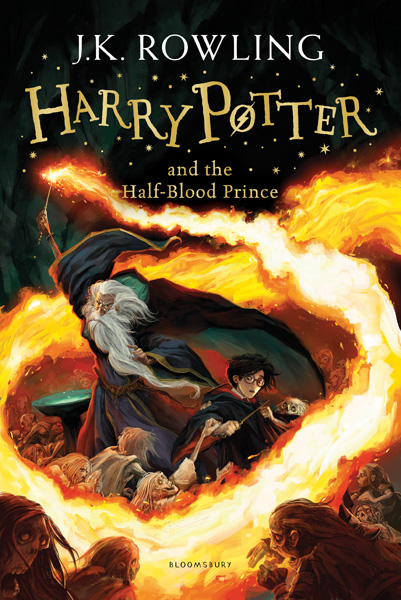 Harry Potter and the Half Blood Prince

Harry Potter and the Half-Blood Prince

Dumbledore and Harry on this island in the cave; Dumbledore is conjuring fire to protect him and Harry from the Inferi.

“Dumbledore was on his feet again, pale as any of the surrounding Inferi, but taller than any, too, the fire dancing in his eyes; his wand was raised like a torch and from its tip emanated the flames, like a vast lasso, encircling them all with warmth.

The Inferi bumped into each other, attempting, blindly, to escape the fire in which they were enclosed …

Dumbledore scooped the locket from the bottom of the stone basin and stowed it inside his robes. Wordlessly, he gestured to Harry to come to his side. Distracted by the flames, the Inferi seemed unaware that their quarry was leaving as Dumbledore led Harry back to the boat, the ring of fire moving with them, around them, the bewildered Inferi accompanying them to the water’s edge, where they slipped gratefully back into their dark waters.” 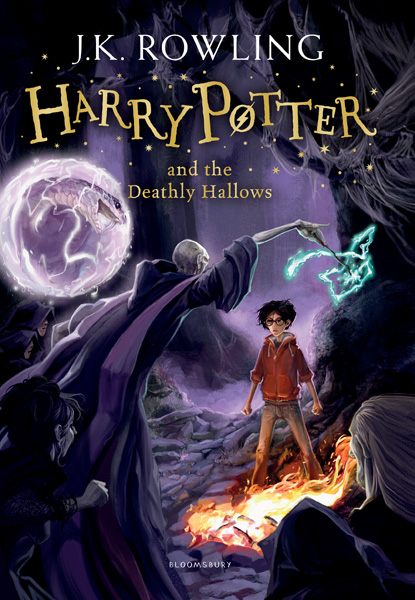 Harry Potter and the Deathly Hallows

Harry Potter and the Deathly Hallows

Harry, as he goes to meet his death in the Forest clearing, faced by Voldemort and the Death Eaters.

“A fire burned in the middle of the clearing, and its flickering light fell over a crowd of completely silent, watchful Death Eaters. Some of them were still masked and hooded, others showed their faces. Two giants sat on the outskirts of the group, casting massive shadows over the scene, their faces cruel, rough-hewn like rock. Harry saw Fenrir, skulking, chewing his long nails; the great, blond Rowle was dabbing at his bleeding lip. He saw Lucius Malfoy, who looked defeated and terrified, and Narcissa, whose eyes were sunken and full of apprehension.

Every eye was fixed upon Voldemort, who stood with his head bowed, and his white hands folded over the Elder Wand in front of him. He might have been praying, or else counting silently in his mind, and Harry, standing still on the edge of the scene, thought absurdly of a child counting in a game of hide-and-seek. Behind his head, still swirling and coiling, the great snake Nagini floated in her glittering, charmed cage, like a monstrous halo.

When Dolohov and Yaxley rejoined the circle, Voldemort looked up.

Voldemort’s expression did not change. The red eyes seemed to burn in the firelight. Slowly, he drew the Elder Wand between his long fingers.

Bellatrix had spoken: she sat closest to Voldemort, dishevelled, her face a little bloody but otherwise unharmed.

Voldemort raised his hand to silence her, and she did not speak another word, but eyed him in worshipful fascination.

‘I thought he would come,’ said Voldemort in his high, clear voice, his eyes on the leaping flames. ‘I expected him to come.’

Nobody spoke. They seemed as scared as Harry, whose heart was now throwing itself against his ribs as though determined to escape the body he was about to cast aside. His hands were sweating as he pulled off the Invisibility Cloak and stuffed it beneath his robes, with his wand. He did not want to be tempted to fight.

‘I was, it seems … mistaken,’ said Voldemort.

MuggleNet followed their interview with Jonny with an exclusive preview of the back cover images and we can show you those artworks too. 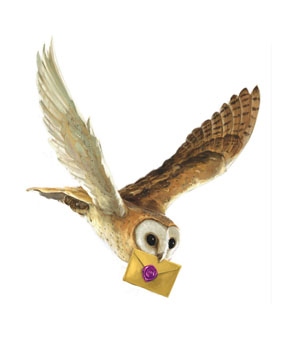 An owl from Hogwarts 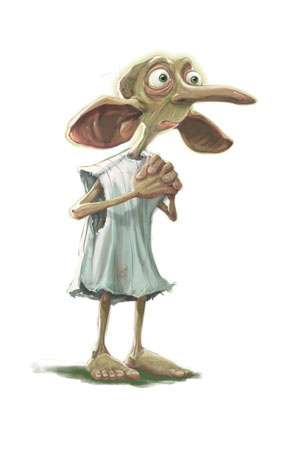 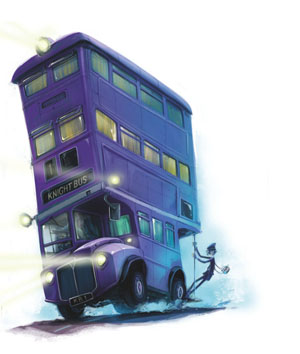 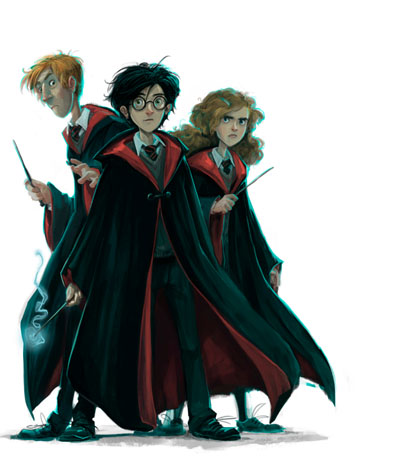 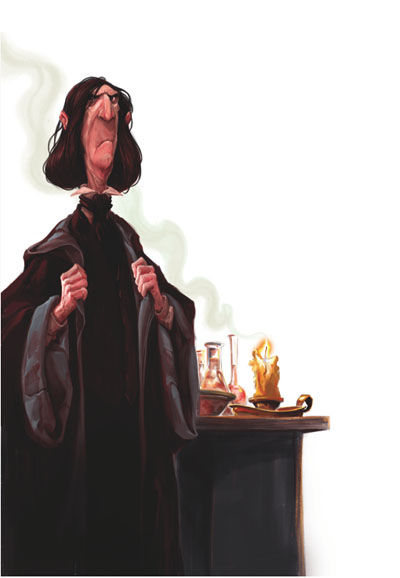 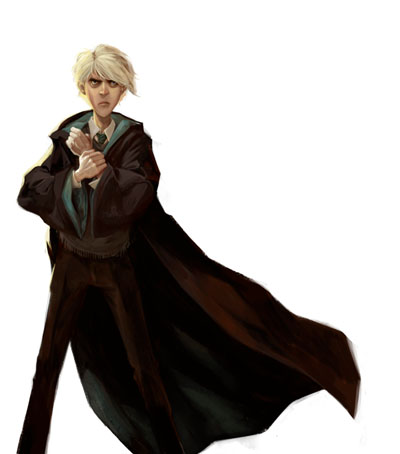 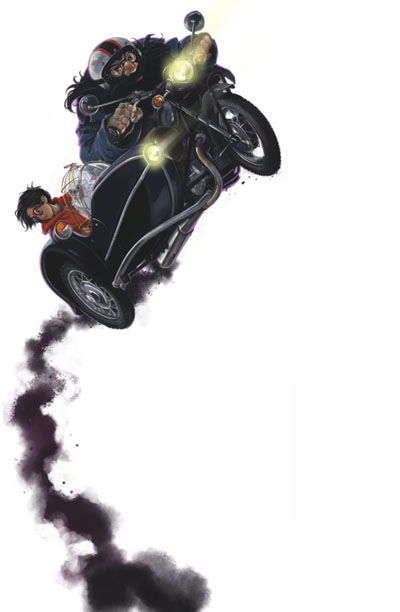 It’s been a hugely enjoyable experience seeing Harry Potter come to life through Jonny Duddle’s unique imagery, he has captured the magic of the text and created classic covers with dynamic impact, great storytelling and wonderful characterisation. It’s hard to chose a favourite but I think this one is mine… 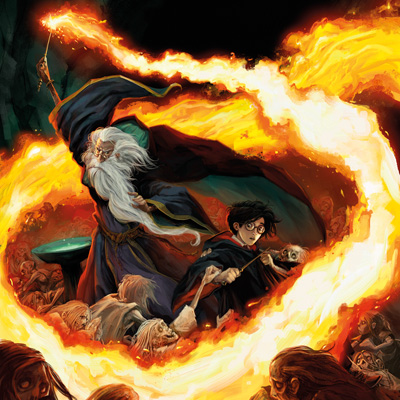 Harry Potter and the Half Blood Price