This week we are taking a closer look at some stunning pieces of artwork created by Graham Carter for New Scientist magazine. With themes of astrophysics and explorations of black holes these striking artworks beautifully showcase Graham’s talent for design and information communication.

New Scientist magazine has been keeping readers up to date with the latest science and technology news from around the world. With a network of correspondents and editorial offices worldwide, New Scientist currently has nearly 1 million worldwide readers every week.

The illustration above, titled The Antiverse illustrates an article about strange particles observed by an experiment in Antarctica which could be evidence of an alternative reality where everything is upside down. Graham imagined the beginning of earth and what went on at the start but with a twist, a hidden parallel universe. This theory of the anti-universe considers a Big Bang where two universes were created – one is ours made up of matter, the right way up and moving forward in time and away from the Big Bang; the other universe is made up of antimatter, mirror-flipped and moving backwards in time towards the Big Bang. 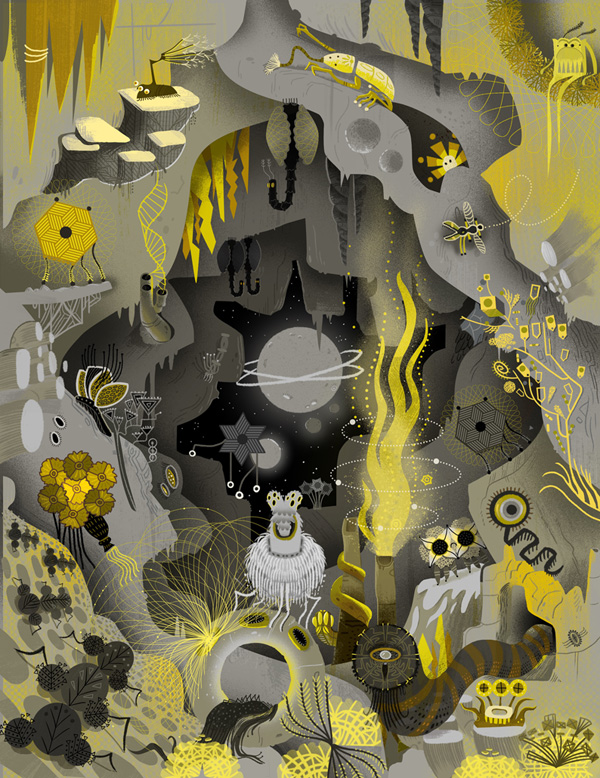 For a feature titled Redefining Life – about life on and off the earth and how scientists are looking at the extremes of environmental limits on our own planet to get a better idea of what potential form alien-life might take. Graham had fun creating his own imaginary life-forms in an alien world. 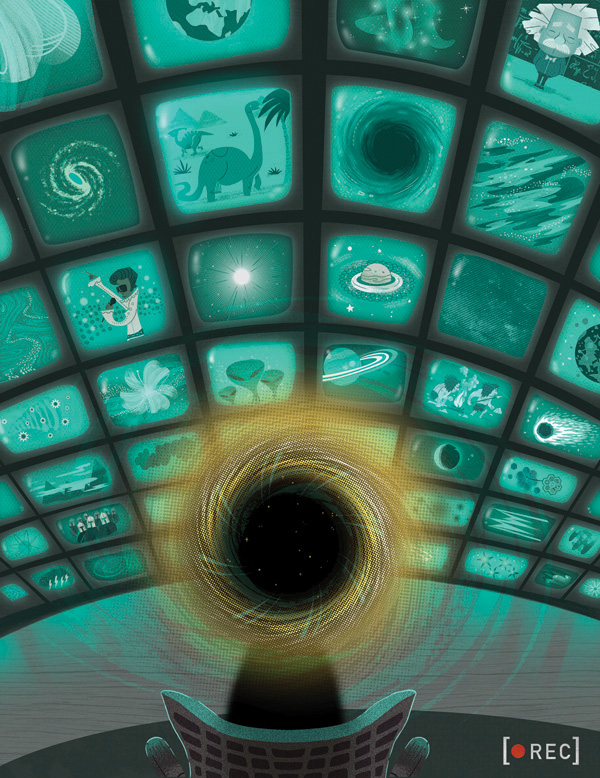 The last two illustrations are from an article about Black Holes and the fact that they have absorbed everthing that they have seen through history. Scientists have discovered that there are many more in the cosmos than first expected, like a cosmic hall of mirrors, where the power of gravity takes light from all directions, warps it, and broadcasts to us an infinitely reflected image. What we’re seeing is similar to a dramatically curved cinema screen, fifty million light years away and a few billion kilometres across, on which an epic movie is playing the entire history of the universe.

A step away from his recent success with his author illustrated children’s picture book Otto Blotter Bird Spotter which was shortlisted for the prestigious Waterstone’s Children’s Book Prize, Graham is in great demand for a variety of design and editorial work. Graham Carter is one of the most intricate and exciting printmakers in the UK. He has been working at the forefront of the printmaking industry for over 15 years and has also worked on commercial animations for a wide variety of clients.

His work is influenced largely by nature and the secrets of the animal kingdom, however, he is equally drawn to the man-made, clunky technology of yesteryear. You may find the occasional clockwork or steam-powered gadget lurking in the bowels of his images if you look close enough (and he likes to think the animals still use this technology!). You can find out more about Graham over on his website.

You can find Graham on Instagram or view his full online portfolio HERE. For more information regarding working with Graham please email info@arenaillustration.com

The nights are drawing in, there's a spooky chill in the air and we have plenty of Halloween treats in store for you! It's been a busy...