Digital methods of creating illustration are becoming increasingly prevalent as new generation of graduates and the publishing industry gently begin to embrace digital means of creating illustration work.  You may have caught a glimpse of some recent posts on Instagram and Twitter by Arena illustrator Joe Lillington relating to how he uses the design and illustration program Procreate, Joe’s illustrative process starts with a pencil drawing where he varies the thickness of line depending on the scale. Sometimes he works over it with pencil and crayon or watercolour, then colours it digitally, Joe then uses Procreate to create a sense of depth and atmosphere in his work.

We have been finding his posts so interesting we thought we would invite Joe to tell us more so he has kindly written this fantastic guest post for us including some great top tips and insights into the way in which he creates his exquisite illustrations, he’s also tells us more about a game design project he’s been working on called Flocc inspired by the murmurations of flocking of birds.

Read on to find out more. 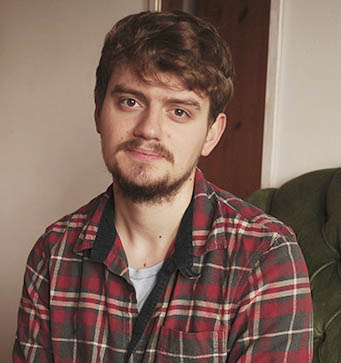 One thing I find really useful is tweaking the brush pressure curve for the individual aspects of brushes. It gives much finer control to how the brush reacts and whether the the size or the opacity is the priority. For example you could have a brush where the pressure sensitivity mostly just controls the size but if you press very very lightly then it will be a little more transparent. 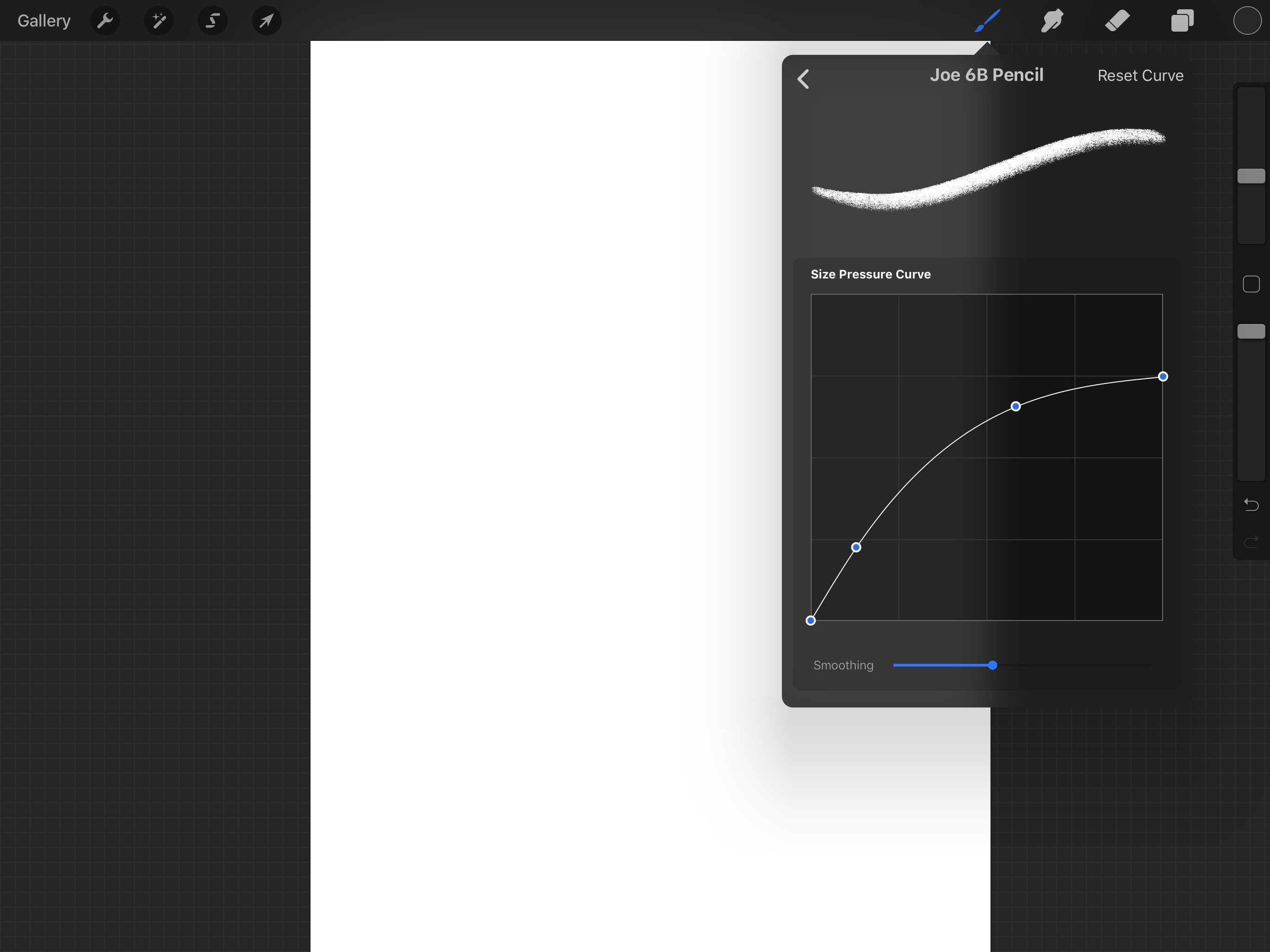 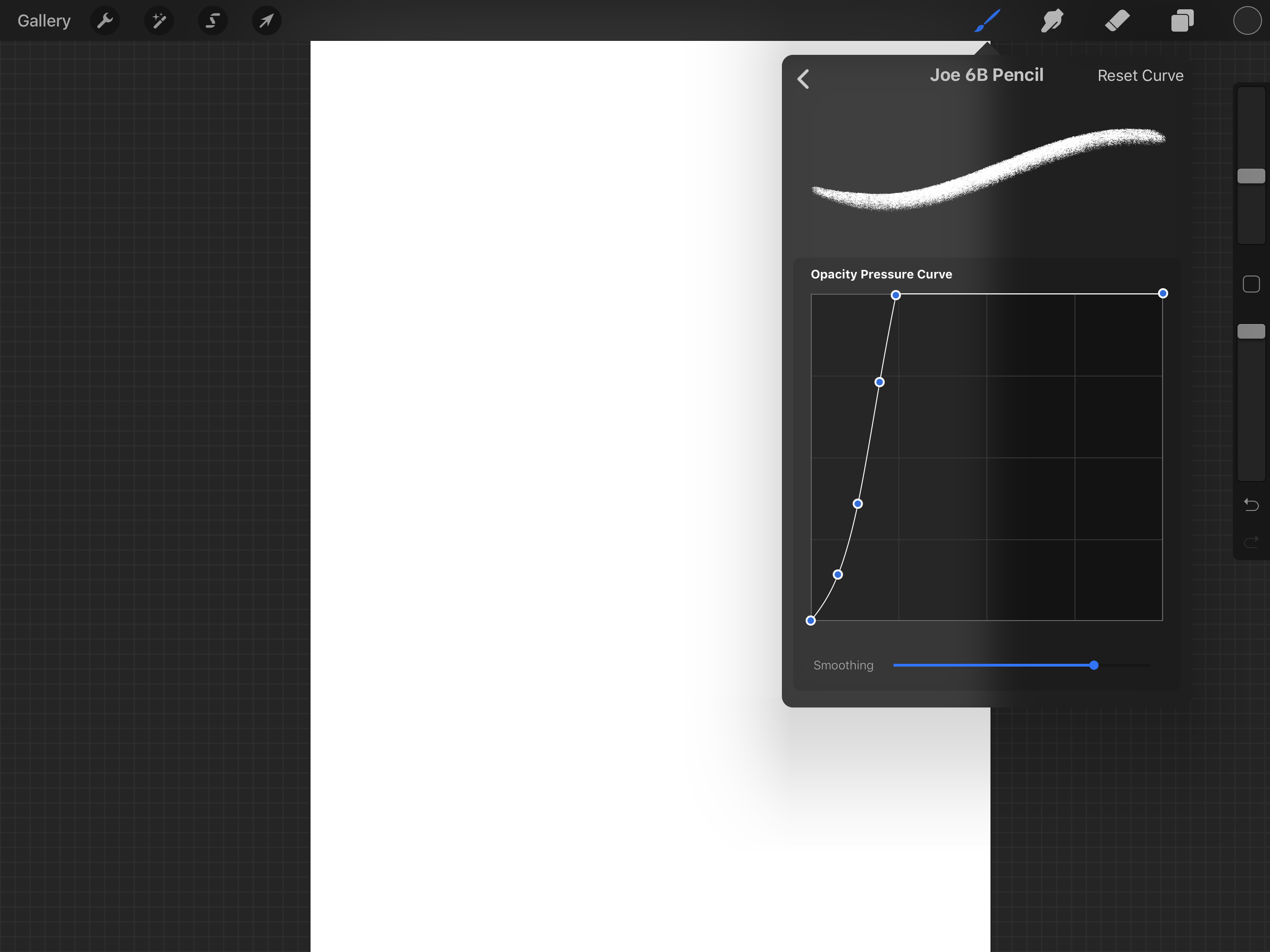 Another tip I have is that you should definitely tweak the overall pen sensitivity. To avoid straining my wrist when working for a long time, I like it to be quite sensitive, so that it doesn’t take much pressure to get to the maximum brush size or opacity. 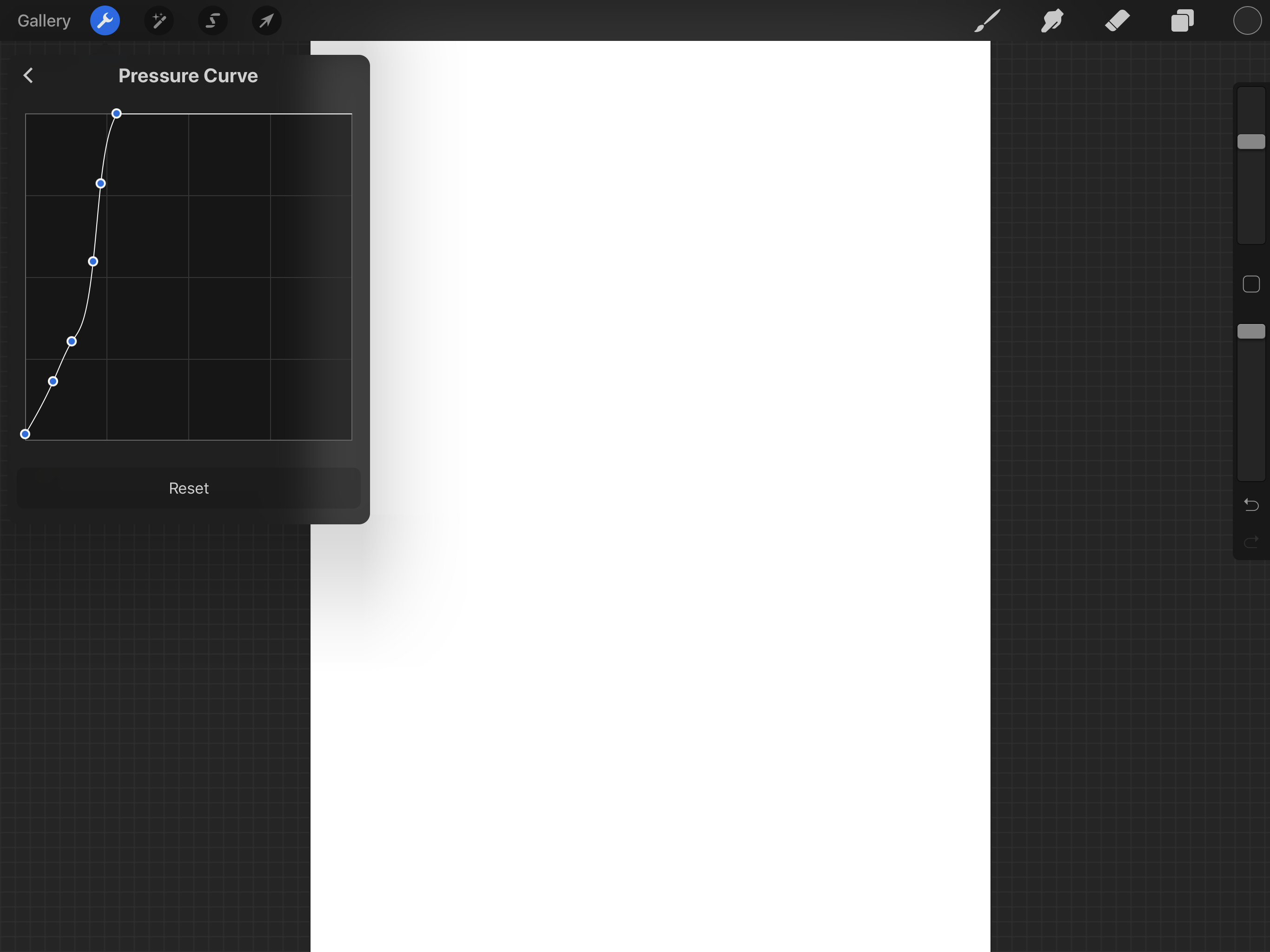 Lastly, a handy little tip that isn’t immediately obvious on procreate is that if you pinch outwards on the gallery view you can see an image full size without having to fully open it. While on this view you can also scroll through all the images in the gallery. This is really great for either quickly checking a detail on a previous piece, or using the iPad as a portfolio.

I started making my own brushes in Procreate quite quickly after getting used to using it. I always aim for my digital work to have a natural feel to it and so it was important for me to have a range of paint like and pencil like brushes that also felt nice to use. The brushes that come with procreate are great, but I think it’s nice to have some of the textures and shapes of brushes which feel like your own. I just kept making more brushes when I thought of a particular effect or feel I wanted, until I realised I had made enough for one or two sets.

Since then I still just make new brushes as and when I need them for a particular piece, then when I build up enough new ones. I group some of them together around a particular theme and release a set.

My favourite brush at the moment is one I just added to my Brush Set 2. It’s called Tilting Dry Brush, and as the name suggests it really uses the tilt of the pencil to affect the size and texture of the brush. It’s a fun brush to use because if you hold the pencil at an angle you get a nice streaky ink like texture, but then if you hold the pencil much more upright, you can a much more solid, thinner line which you can use to add detail. 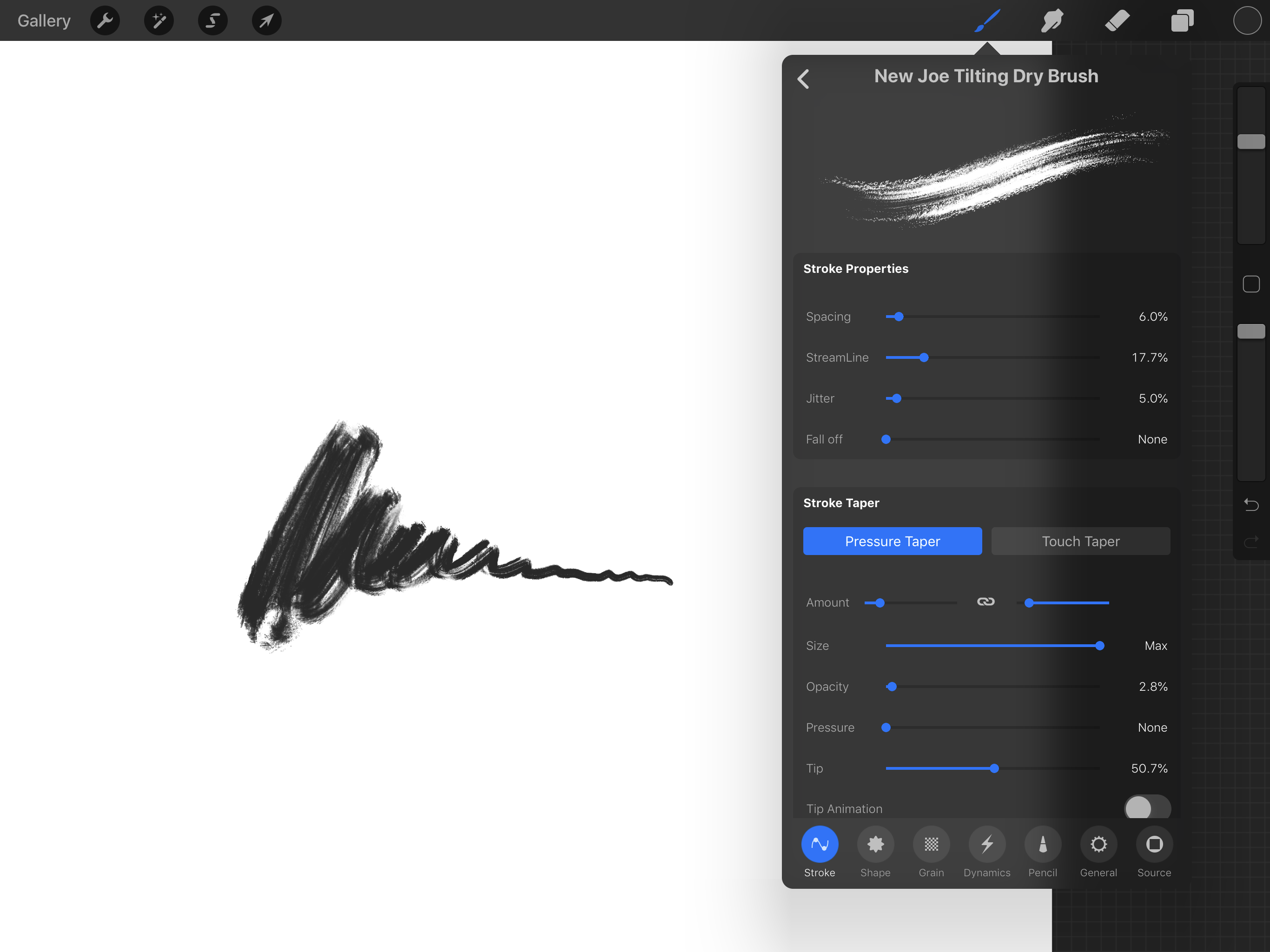 For the last year or two I’ve been playing around with developing little games and learning how to code in my free time. I’ve started various small projects, but my new game Flocc is the first that I have finished and released.

It’s a simple relaxing game where you control a flock of birds by dragging in the direction you want them to fly. The loose aim is to gather more birds into your flock. But the real purpose of the game is just to enjoy the murmurations formed by your flock and explore the silhouetted landscape while listening to music by The Hardy Tree (Frances Castle).

In the game you don’t actually directly control any of the birds in the flock; Instead you just move around an invisible point which acts as the leader of the flock. All the rest of the birds have their own script running that looks for nearby birds to follow and then moves towards them. It was a tricky balance to make sure they follow you enough so they don’t get left behind, but at the same time move in a natural organic way, rather than sticking to you too tightly.

Flocc is a meditative experience where no rushing or panic is necessary. Just fly around and gather your tiny pixelated birds however you want. The concept and design are really thoughtful and appealing, the music soothing. It’s a lovely game. – App Store Review

Beautiful meditative app with soothing twilight skies and shifting silhouettes – and a fluttering spiral of starlings – or similar – to collect before nightfall. – App Store Review 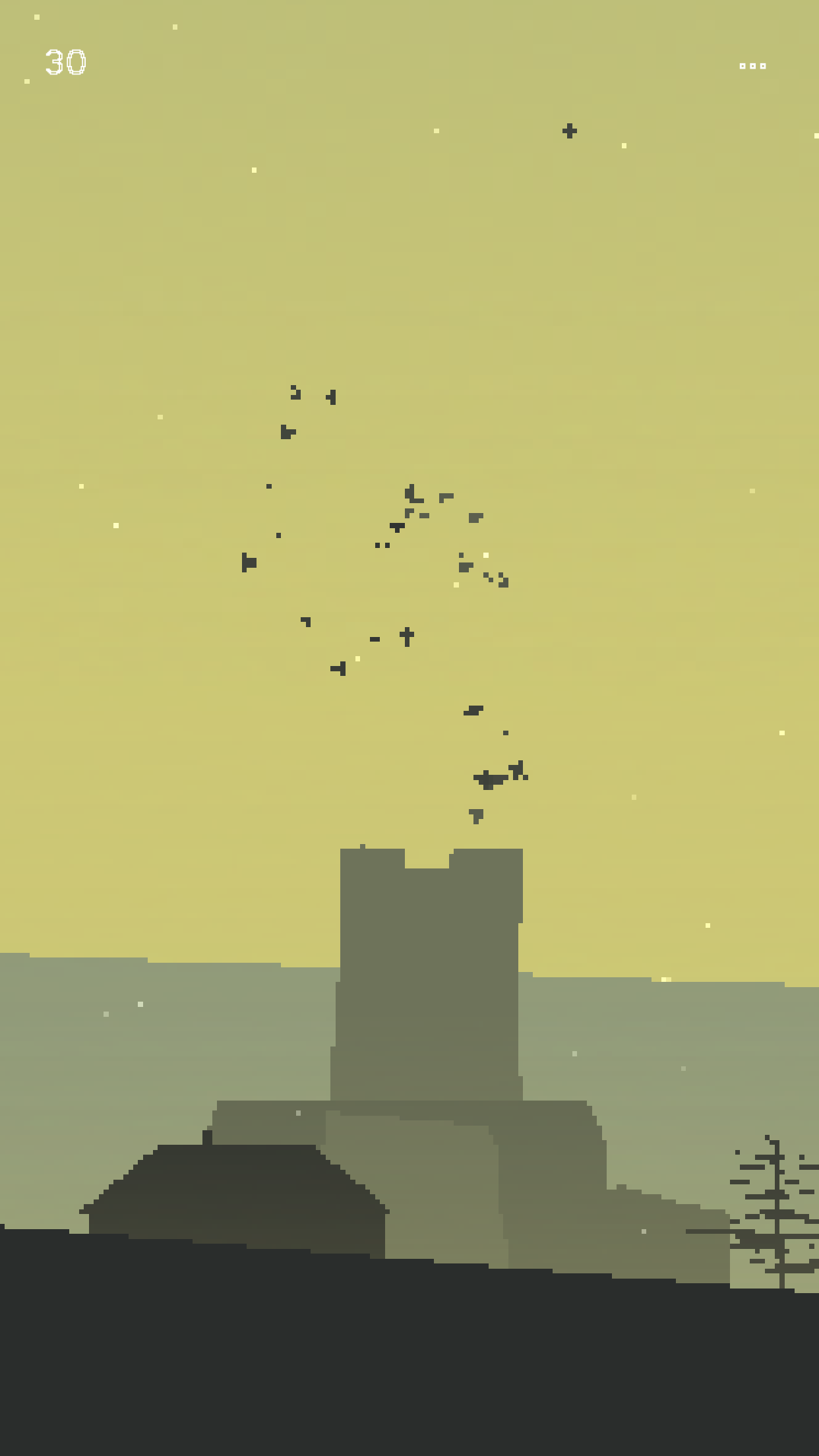 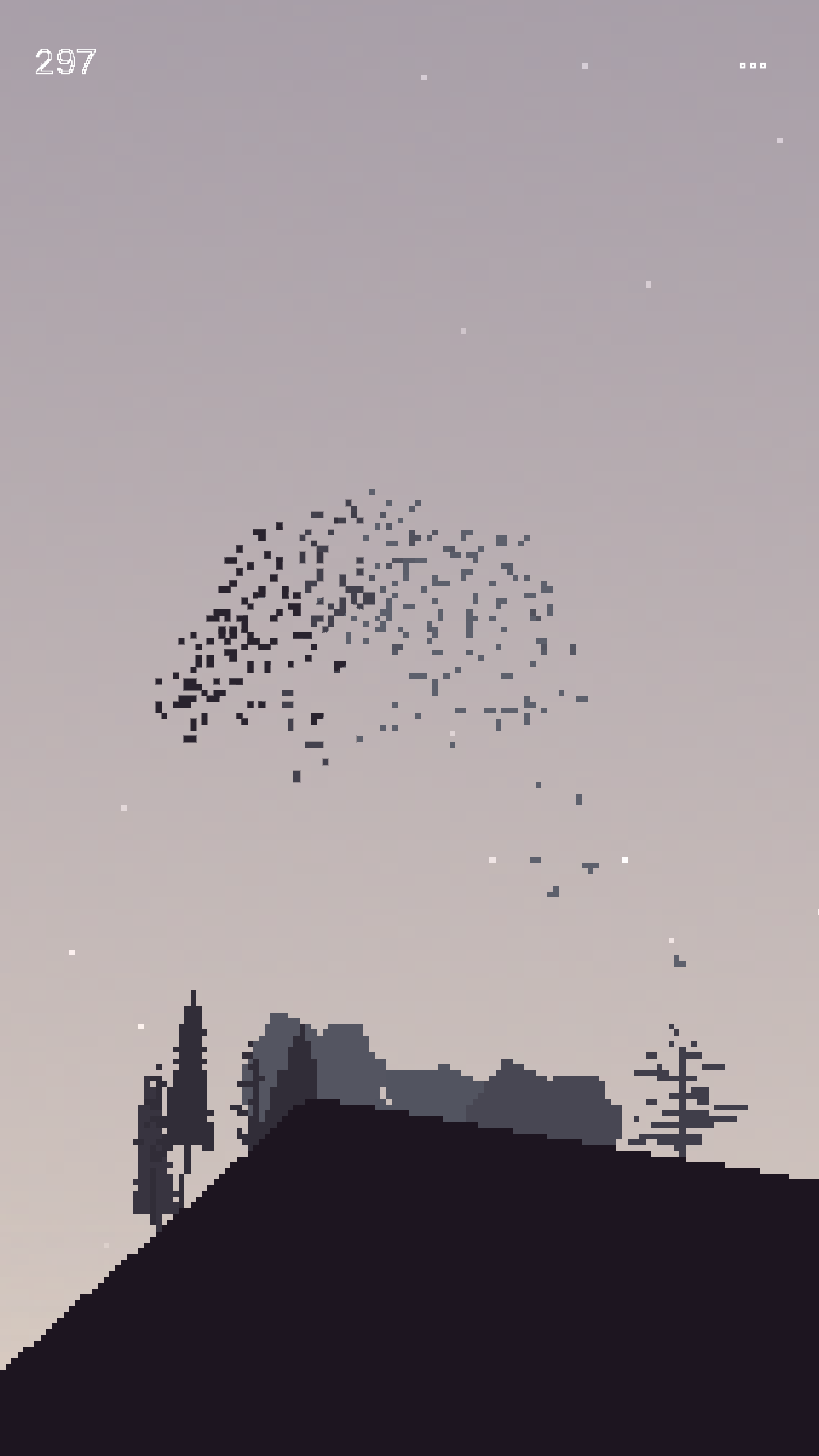 This week we are celebrating the work of Arena Illustrator Joe Lillington, his incredible attention to detail, his ability to create...