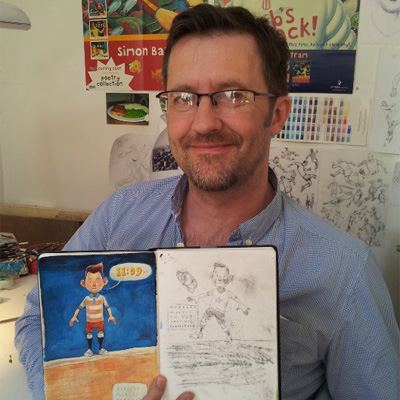 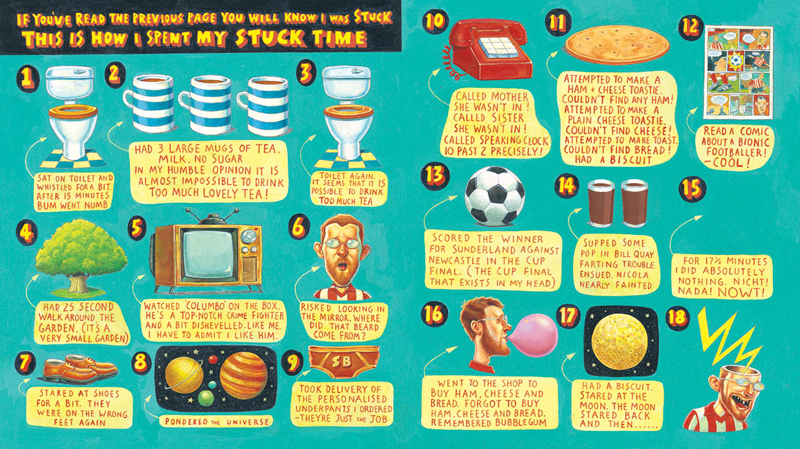 Which books or comics did you enjoy as a child and do you think they influenced your decision to become an illustrator?

My first memories of reading centre around the books of Richard Scarry. I loved the amazing amount of detail he put in and I’m sure that, deep down somewhere, such detail has influenced the kind of work I do now. I remember visiting the books over and over and finding new things every time. Like millions of other kids, then and now, I also loved Roald Dahl’s books and, of course the wonderful, iconic work of Sir Quentin Blake. His drawings are a joy to behold. Recently, I was looking at some of his originals at the House of Illustration. They seem effortless though, obviously, they are the results of thousands of hours practice and, no doubt, much love and worry. I did indeed love comics too, in particular football comics such as Roy of the Rovers. It had great stories such as ‘ The Footballer who wouldn’t stay dead’ and ‘Simon’s Secret’ (he had a bionic leg). Some of the illustration was terrific. In particular, I loved the artist who drew Hotshot Hamish and Mighty Mouse. His name was Julio Schiaffino. Each frame he illustrated was perfect. Confidence oozed from every stroke of his pen. 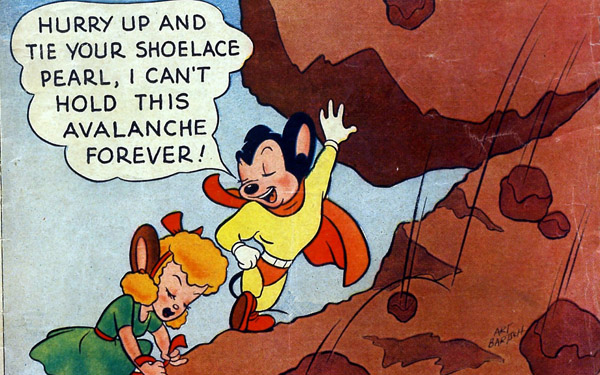 Your artwork has an incredible almost mind boggling level of detail and craftsman ship, how does each piece begin?

Like many illustrators, my pictures begin with thumbnail sketches in notepads and sketchbooks. With these doodles I test the water and find out what will and won’t work without investing too much time in detail. Then, when I have a rough idea of what will be what, I spend time producing more in depth roughs. Often I work on tracing paper which enables me to easily change compositions and the bits and bobs of the image. Any spontaneity will happen at this stage. By the time I begin painting I like to know exactly what I’m going to be doing and, hopefully there will be no nasty surprises. At least, that’s the idea! 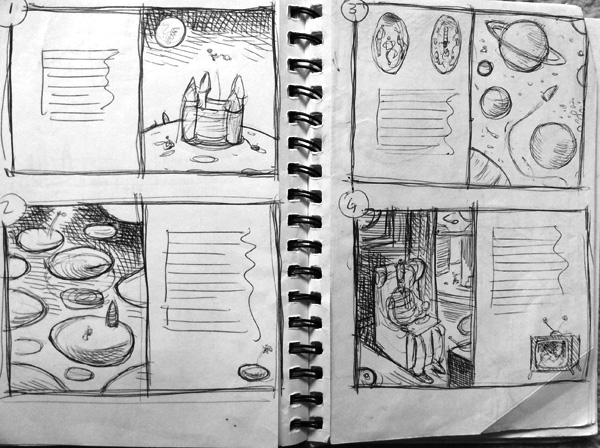 Thumbnails sketches for Man in the Moon, a Day in the Life of Bob 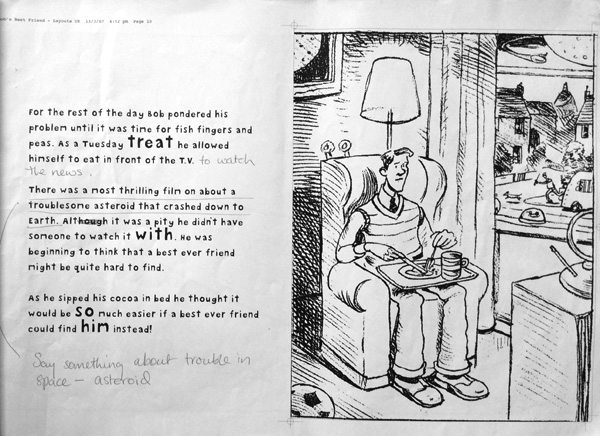 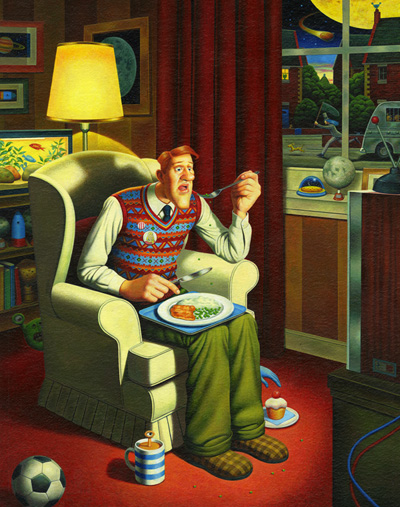 Your most recent picture book ‘Up for the Cup’ was inspired by your life-long love of Sunderland football club. Was creating a book about your passion for footie the realisation of a dream? Do you have any special football match memories from your childhood and did you ever fancy becoming a professional footballer?

‘Up for the Cup’ was a super book for me to make. As a kid I would draw hundreds and hundreds of football pictures. I drew the players, the stadia, the strips and the badges and so, to do the same in a book seemed like such a natural thing to do. It was great fun and it was almost a prophetic book too. A couple of months after finishing the work my beloved Sunderland AFC emulated the fictional Seaburn City and made it to the League Cup Final at Wembley to play a team who wore the same colours as the opposing team in the book. It was strange! It was an omen! It was meant to be! But wait! No it wasn’t! Manchester City beat us 3-1 and so that was the end of that! Booooo! Also, yes, I would still love to become a footballer. I sit by the phone on a daily basis waiting for the Sunderland manager, Gus Poyet, to give me a call. I think he may have accidentally deleted my number. 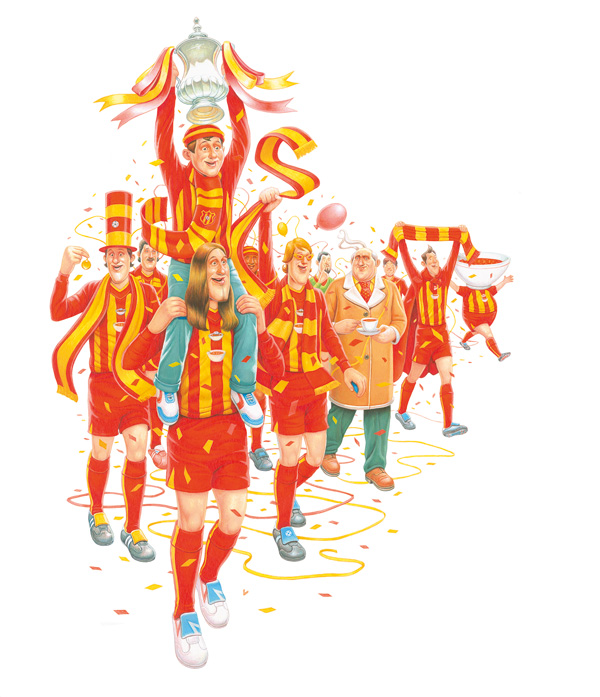 Up For The Cup

You are perhaps most well-known for your fabulous intergalactic caretaker Bob Man on the Moon. If you were commissioned to be artist in residence on the moon which three pieces of kit would you take with you?

Aside from my pencils and paint etc I would take:

1.    A self assembly shed so that I could work in peace without astronauts constantly telling me that I’ve drawn the Sea of Tranquility wrong.

2.    A big foam hand so that my family back on Earth could see me waving to them.

How has the way in which you work changed over your career, do you find you are moving towards digital platforms/techniques?

I think my work has evolved slowly without drastically changing at any point. It has become brighter though, I think and the size my chins and hands are getting smaller too.
Also I think I will always paint and draw. I love being mucky and caked in paint. That said, I am interested in the work that some people are doing using digital methods. It’s incredible what can be done but, of course, it’s how the illustrator uses the available techniques that counts.

Aside from football music and illustration what are your passions and how do they inspire / influence your work?

To be honest, aside from the three things mentioned along with my family, there isn’t a lot of time left for anything else. Music does indeed inspire me. I listen constantly as I work and would hope that I have quite an eclectic taste. Often music drags me through the night when I’m rushing to meet a morning deadline.  I measure the amount of time left in music. By the end of a certain album I must have a certain amount of work finished. It helps to play albums with long songs!

Tell us a bit about your formal training? What was the best or most useful piece of advice you were given and what advice would you give illustrators graduating now?

Though I studied at Birmingham Polytechnic and enjoyed it, I would tell students that they themselves are the ones from whom they can learn the most by constantly drawing and drawing which will ultimately hone their skills and style. You have to love what you do too. Otherwise you’ll be sunk!
[/two_third_last]

We are beyond excited with the recent World Book Day 2021 announcement, it's a bumper year for Arena Illustrators and we couldn't be...

It's always a delight to see our Illustrators talents spotlighted in art publications and this spring Levi Pinfold stars as a featured...