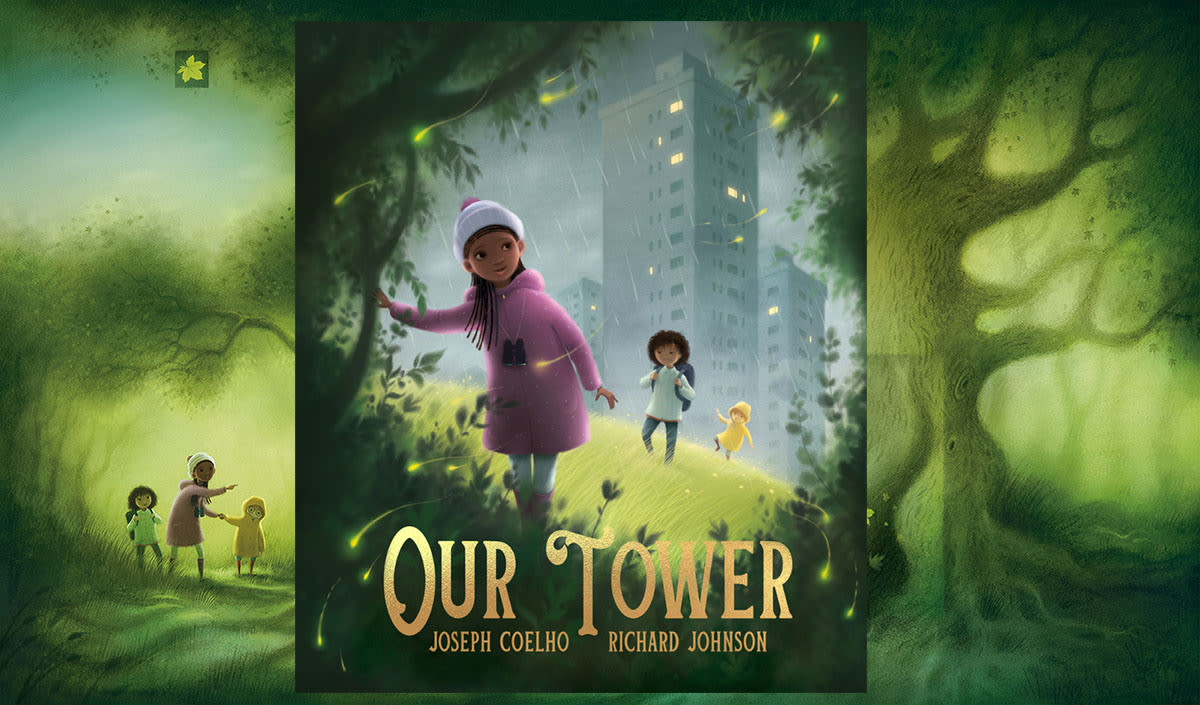 Richard has done a magnificent job and I love the warmth and magic of his illustrations - Joseph Coelho ...Breaking through feelings of isolation, and celebrating our homes, families, friends, and environment. - Richard Johnson

Our Tower is a deeply personal story written by the newly appointed Children's Laureate, poet and author Joseph Coelho and illustrated by Richard Johnson.

Inspired by Joseph’s childhood growing up with his sister in a tower block on an estate bordering Richmond Park, this unique hybrid picture book explores the way in which society separates ‘urban’ from the countryside.

A magical modern-day fable which follows three inquisitive children living in a tower block, as they embark on a fantastical journey. The band of friends find themselves in a strange, magical world inside an old tree where they meet an old green man with supernatural powers, only to realise that the magic they'd been looking for had been in their tower all along.

Richard Johnson has created moments of real magic and wonder with his atmospheric illustrations in blue, green, brown, and grey hues highlighting the transitions between the urban, fantastic and natural environments. The imagery has been cleverly displayed as full spreads alongside vignettes with scenes intertwined with the text giving this book a unique contemporary feel. Note must also be paid to the incredible behind the scenes research work carried out to make the illustrations as authentic as possible, Richard ensured that architectural details were as accurate as possible as were references to specific architectural details, and public statues mentioned in Joseph’s story making this an unforgettable cinematic reading experience. Working closely at all stages of the book, when he saw Richard's roughs Joseph said...

"Richard has done a magnificent job, I love the warmth and the magic of his illustrations, I love the details he has included ... and so lovely to see his version of The Watchers Statue by Lynn Chadwick . I think the comic book style framing and overlapping works brilliantly it feels like an advent calendar with gorgeous surprises on every page. 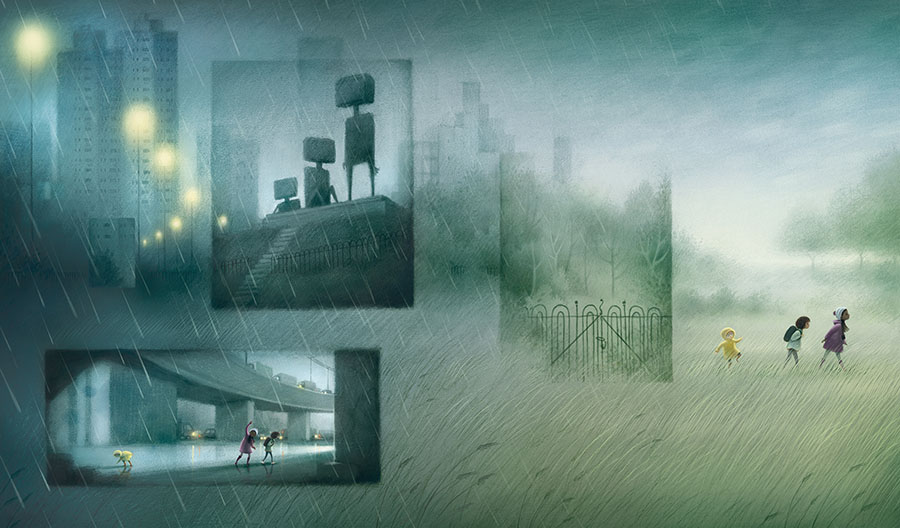 The green man and the hand over of the stone feels like a real moment of wonder and splendour and the change in orientation as they make their way back out of the tree feels so right and to have that then followed by a spread that shows us both the block through the stone and the estate simultaneously upside down is genius it makes me think of viewing something far off through a raindrop and the resulting inversion that that creates. 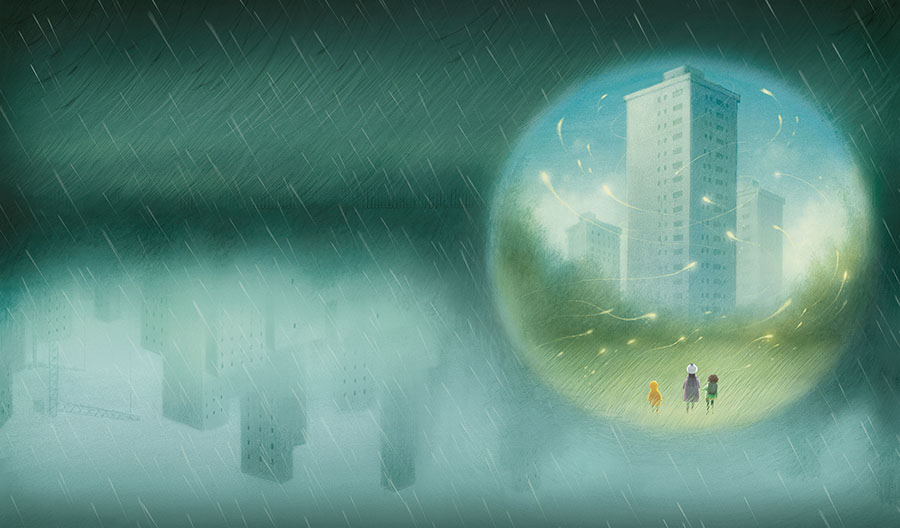 The return to the block feels very exciting and the change of perspective as we look down on the children is wonderful  being both architectural and filmic in nature. It is so great seeing community blossom here as we feel the impact of the children's journey affecting everyone, I adore the way that nature is all over the estate by the end... 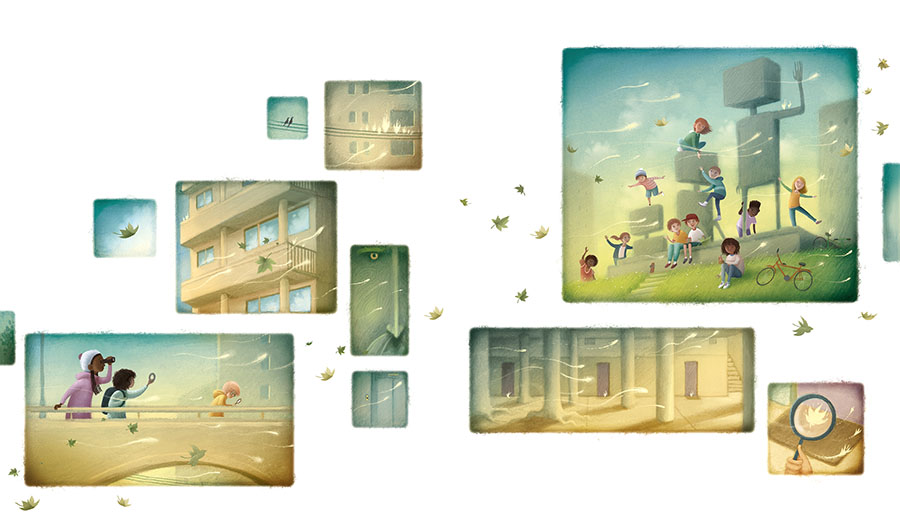 There is so much to appreciate and unpick here - feels like a very special book."

Richard put a huge amount of effort into researching the imagery mentioned in the poem and recreating it in the illustrations, we asked him about his research process and how it works differently on different projects.

"After speaking with Joseph about the adventures he had growing up in Roehampton, near Richmond Park, I did some visual research into the area and Joseph sent me some photographs. I really wanted to try and create a visual adventure that would complement Joseph’s poem, blending the mundane, the dark and dangerous with the fantastic and celebratory. Visual research is really important to undertake in any project, especially for ‘Our Tower’, and the methods change from project to project. I think a lot of Joseph’s work is autobiographical, so it was important to me that I got a sense of Joseph’s personal story in the imagery. Whilst some of the details had to become lost in the finished artwork—for commercial purposes—I hope the essence of some of that initial research influenced the entire project. I also recorded myself reading the story and went for a long walk into the countryside. As I listened to the words on repeat, I used the countryside to inspire visual stories for the semi-imaginary underground world where the children play. I only started to draw when I got home."

We asked Richard which was the most enjoyable spread from Our Tower to work on?

"The book is slightly longer format, so I wanted to expand my interests in sequential visual storytelling, using multiple panels and trying to blend the forms of children’s books and comic books. I think I had the most fun developing the sections of the story where the images work in quick succession, layering and moving the children through the city environment and into the magic underworld. We were still in lockdown when I was designing the book, so it was easy to draw inspiration from the mood of the nation, those feelings of separation and being placed in boxes! For me, this is the spirit of the book. Breaking through those feelings of isolation, and celebrating our homes, families, friends, and environment.

The part where the children are gifted a magical stone was also fun to design. I needed to create a device that visualised the change in the way the children see their world when it goes ‘upside-a-diddle’. After a few failed attempts, I opted for a circular orb. The shape allowed me to play with how I designed the artwork on the pages, forcing the reader to orientate the book in slightly different way to appreciate the children’s journey of discovery."

A timely, hope filled and enchanting story for those seeking adventure, which children and adults alike will fall in love with, Our Tower is published by Frances Lincoln part of the Quarto Publishing Group on the 2nd August and can be ordered by following this link.

We are thrilled to be working in partnership with the team at Discover in Stratford London, who are the perfect venue for the launch of this book. They are hosting an amazing interactive event with Richard and Joseph as well as  showcasing of some of his incredible illustrations from the book in the Discover Café. You can find out more about this special event HERE .

As Our Tower hits the bookshelves this multi-award-winning newly partnered creative duo are already taking the children’s publishing world by storm with Our Tower being celebrated as Children’s Book of the Month in partnership with The Booksellers Association.

You can find Richard on Instagram or you can peruse his online portfolio HERE. For more information regarding collaborating with Richard please email us info@arenaillustration.com

We are always thrilled to welcome a new illustrator to Arena Illustration and we are delighted to introduce you to Richard Johnson....

The Song from Somewhere Else

Levi Pinfold has created stunning illustrations for A.F. Harold's new book The Song from Somewhere Else published by Bloomsbury....