Award-winning illustrator Thomas Flintham’s best-selling Press Start! series is about to transition from the printed page to the small screen as we announce that Cyber Group Studios (who also developed Jonny’s Duddle’s Gigantosaurus into a hit series) are set to bring Sunny, Super Rabbit Boy and pals to a whole new audience.

Since publishing in 2017 Thomas Flintham’s Press Start! series published by Scholastic has sold a phenomenal 2 million copies in the US alone and with Emmy Award-Winner Scott Kraft on board as Executive Producer and Head Writer, Cyber Group Studios are poised to create 52 x 11 minute exciting animated episodes.

“Thomas Flintham’s engaging characters and clever, fantastical Press Start! game-world are the perfect launch pad for an endless series of adventures. Super-excited to work with Cyber Group’s incredible artists to build an epic immersive video-game world for Sunny and friends to play in.” – Scott Kraft

Thomas  studied BA Fine Art at De Montfort University and graduated with a distinction in his Masters degree in Illustration at Camberwell College of the Arts.  Now based in Cornwall his work is influenced by his interest in all kinds of books, films, comics and video games.

“Since I was a kid, I’ve been a big fan of books, video games and animation, and I’m so excited that Press Start! is going to expand to cover three of my biggest passions. To see my work being turned into an animation is a childhood dream come true, and Super Rabbit Boy couldn’t be in safer hands than the super talented folks at Cyber Group Studios.” – Thomas Flintham

We are so excited for Thomas and Super Rabbit Boy and hope this animated series leads on to a whole new wave of Press Start! fans.

You can view Thomas’s online portfolio HERE or for more information about working with Thomas please email info@arenaillustraion.com – You can read more about the development of this animated series HERE 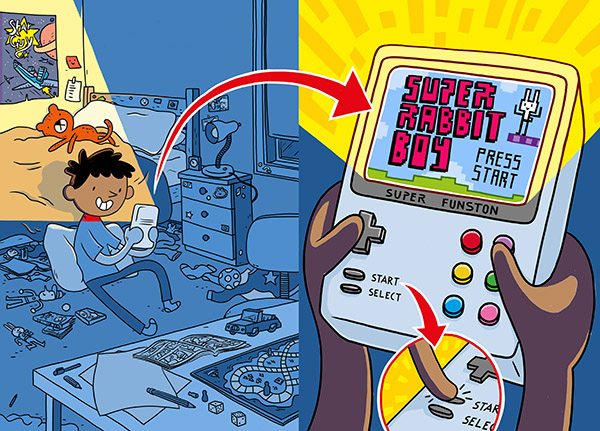 We are thrilled that Thomas Flintham's Press Start book has won the emerging readers category in the 30th Anniversary Sheffield Children's...

PRESS START! It's Blast Off with Thomas Flintham

This action packed series of books created by Thomas Flintham will be sure to entice even the most addicted screen fiends away from...