New work and in conversation with illustrator Frances Castle

This week we’ve spent some time in conversation with illustrator Frances Castle looking at her current projects and finding out more about her passion for collecting treasures, her inspirations and a sneak peek at some stunning unpublished work.

Frances is currently developing her own full length graphic novel entitled Stagdale, using a clever vintage colour palette. Based in the 1970’s, this is a tale of mystery and intrigue as 12 year old Kathy finds herself in the sleepy village of Stagdale amidst her parents divorce. Stumbling upon a diary written a generation earlier by a young Jewish boy escaping Nazi Germany, Kathy embarks on an epic journey to re-discover a mysterious lost jewel. 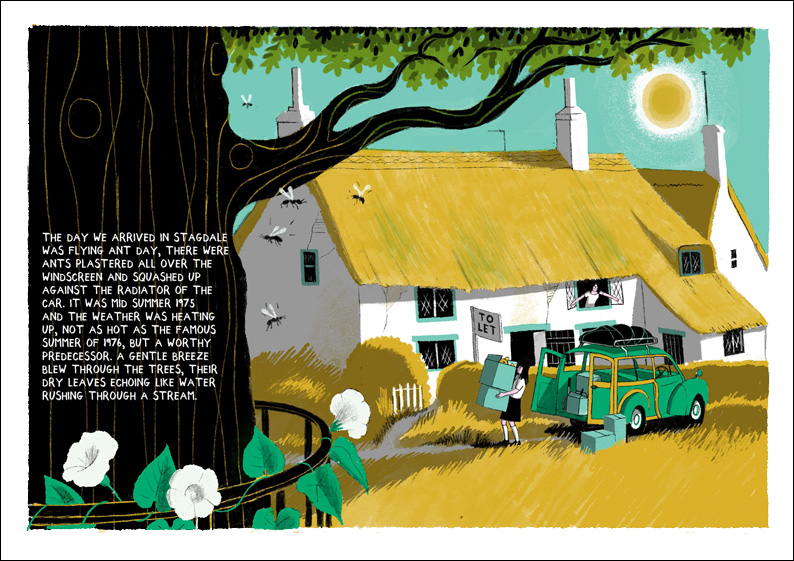 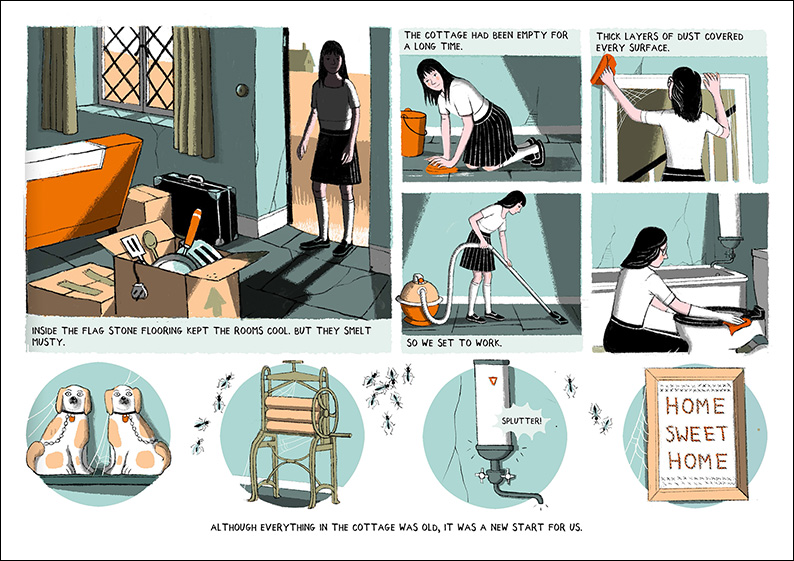 Frances illustrated these fabulous posters as part of the Upswing festival showcased across London this summer promoting a series of events based on the theme Women: Work and Power, which have included discussions, exhibitions, theatre, music and more. 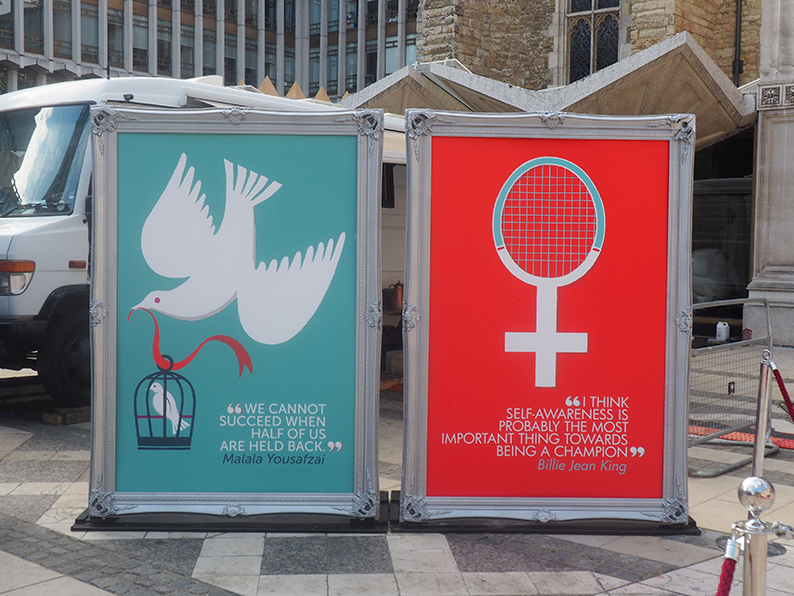 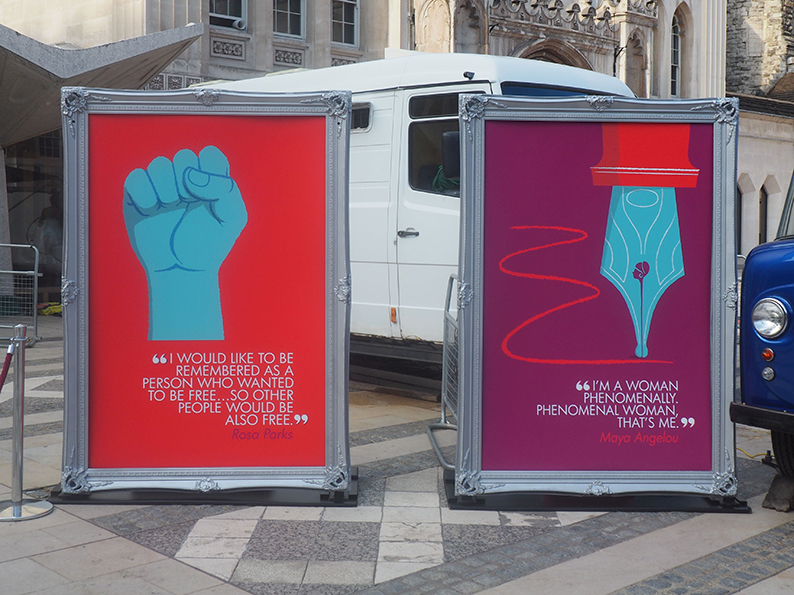 In conversation with Frances Castle:

You are a keen collector of all things vintage, which three of your treasures would you save in case of an emergency?

Over the years my partner and I have bought a lot of stuff in junk shops and markets. It is hard to pick out one thing, but at the moment it is probably my two bicycles, one was built in 1954 and the other 1969. They are from an era when bicycles of their type were handmade, in little workshops up and down the country – which is hard to imagine now. I guess if there was an emergency I could escape on one of my bicycles which would be handy.

I like to keep trying new things out, one of the reasons I started my little record label (Clay Pipe Music) was to give my self a place to experiment when designing artwork for the sleeves. Initially I wanted to do more work away from the computer and play around with print making. That has had to change a bit as the label has grown, and I’m doing bigger runs and vinyl LP’s. Later in the year I’m doing an LP for singer Sharron Kraus based on some Welsh folk tales called the Mabinogi I’m really looking forward to doing the artwork for that. 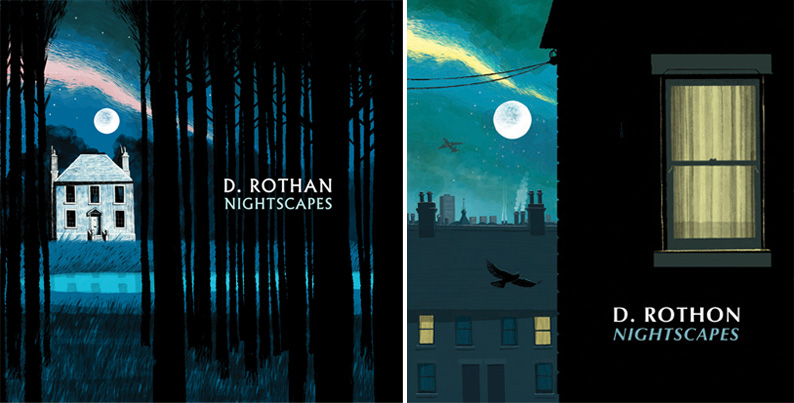 Which Children’s classic would you most like to illustrate and are there specific illustrations from books which you remember?

I still have the copy of Miroslav Sasek‘s ‘London’ that I had as a child, I never got rid of that. I loved Richard Scarry – I think I was drawn in by the detail, and the fact that it was American made it fascinating to an English child. Also Ladybird books where the illustrations were really real looking, I loved pop-up books – I had a pop-up Wizard of Oz where the whole of the Emerald City stands up in the centre pages. I also had a copy of Struwwelpeter which had belonged to my Dad as child, it was in my book case but I was too scared to get it out and even look at the cover let alone open it up.

Do you follow the work of other artists in your field and are there particular favourites who we should keep an eye out for?

Yes I’m always looking at other artists work. In recent years I’ve become interested in the work of British print makers like Bawden and Ravilious and their contemporaries. I love the books that Nobrow put out, and the artists St Judes promote, I’m always looking for interesting comics to read, and like to dig around in second hand book shops for old illustrated books and magazines. I’ve admired the work of people like Paul Blow, Adrian Jonhson, and Jonathan Burton for a long time, newer illustrators Eleni Kalorkoti and David Doran are both really good.

As the nights draw in do look out for our haunting autumnal postcard featuring the cover illustration from Between Worlds; Folktales of Britain and Ireland.  If you are not on our promotional material mailing list and would like to be please drop us a line with your details info info@arenaillustration.com 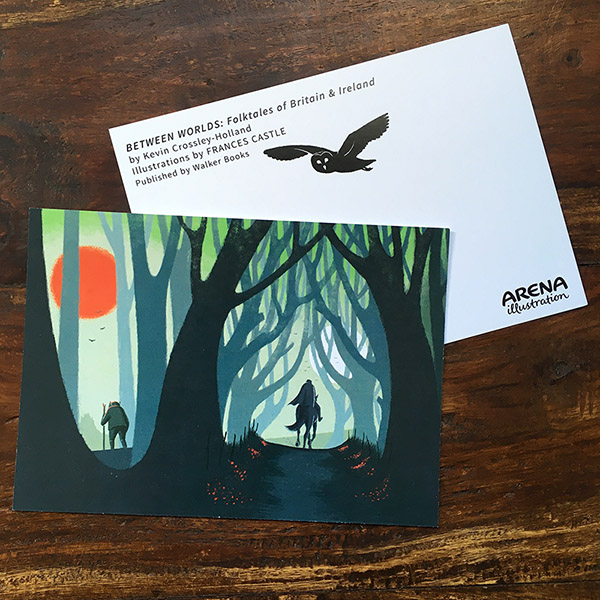