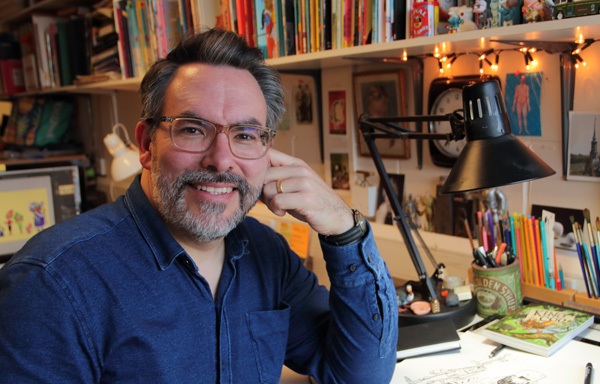 Beards are all the rage and we have not one but TWO magnificent beards in our latest Arena Illustration Vlog!  We took a trip to Brighton via an ice cream van to meet up with King Coo creator Adam Stower in his studio ahead of the release of  The Curse of The Mummy’s Gold.

From picture book concept to fully fledged big fat fiction, King Coo with its lavish illustrations and cast of madcap characters makes the perfect read for reluctant readers or those seeking high jinx and adventure. It is that sense of freedom and joy in childhood that Adam was keen to capture. Prepare to be dazzled as you are treated to a glimpse of the very first known sketch of King Coo, not long after she was plucked from the Amazon river. Gaze in awe at the scribbles, doodles and notes which once unravelled became the stories we know and love today.

In this video Adam speaks passionately about the importance of friendship and its pivotal role in the King Coo stories. A unique relationship blossoms between Ben Pole and King Coo, which becomes greater than the sum of its parts, enabling both to flourish.

So pop the kettle on and pull up a chair to Adam’s drawing board and enjoy an insightful and entertaining three minutes with one of the country’s most beloved illustrators. We hope you like it – please do share.

King Coo: The Curse of the Mummy’s Gold publishes this month with David Fickling Books. You can view Adams portfolio HERE or follow him on Instagram and Twitter