A new year heralds the arrival of a new series by Thomas Flintham, commissioned by Scholastic in the US this new series is part of Scholastic’s ‘Branches’ series, which is aimed at younger readers, encouraging them to choose the books that they will enjoy reading. Published first in the USA in January we will see it in shops in the UK in August. 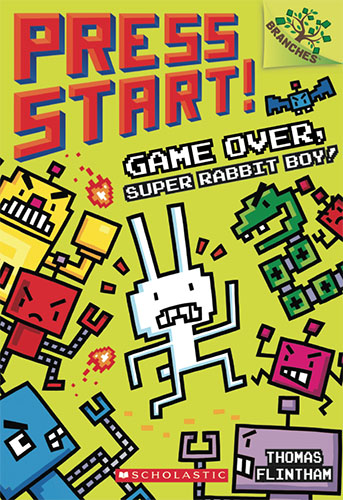 The Press Start series takes place in Super Rabbit Boy Land inside a ‘Super Funstan’ game (rather like a gameboy), in this first book we meet our pixellated hero, Super Rabbit Boy, as he saves the fun loving Animal Town from the mean King Viking from Mount Boom who, with his robot army is set to destroy the songs, which all the animals dance to and remove the happiness from the town by kidnapping Singing Dog. Solving the games levels and powering up with carrots, Super Rabbit Boy tricks the Robo-Fish, hops across the desert on Robo-Lizards and tunnels under Robo-Snakes. With every try the boy playing the game gets a game over sign at every level until finally he learns how to defeat King Viking and his robots and rescue Singing Dog bringing happiness and fun back to Animal Town. 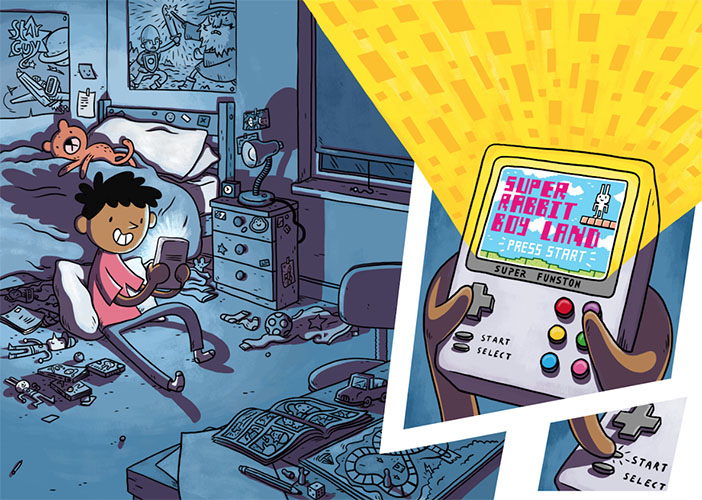 I think to have a series of stories that reference gamer/adventure culture is a great idea, and a bit of a dream project for me! I got a Nintendo Entertainment System for christmas way back in 1991 and I haven’t stopped playing since! The stories and settings in retro games in particular offer a really fun and interesting set of worlds and characters to draw inspiration from.

Adventure Time is a show I particularly enjoy because of how it draws inspiration from some of the games I used to play when I was a kid, and even though it isn’t specifically a video game show it often feels like a more authentic representation of what it feels like to play games than other examples of films or shows that draw from video games for inspiration, such as ‘Wreck it Ralph’ and ‘Tron’, or the old 90’s show ‘Reboot’. These examples create a world where the characters know they are in a game, which never felt quite right to me. When kids play a game they enter its world, I certainly never considered that Super Mario would know that he is just a character in a game.

I really like the idea of creating stories where the reader knows the story is happening in a video game but the characters don’t. You could even show the player outside the game to reinforce this idea. This could help the reader to relate to the story, even one set in a strange surreal world, but also help create some funny possibilities within the stories, such as what happens when two friends are playing with each other or if the whoever is playing the game isn’t very good. Some stories might draw from this more than others but by at least showing the player and the game being started at the beginning it could help set the scene.

One element it could also be fun to draw from in these stories is the range of characters and worlds I used to enjoy playing as. Each story could be set in a different kind of game with a different setting. so one could be in a colourful platform setting, then you could have a spaceship game setting, a racing game or an epic role playing game. Each type of game would not only offer its on setting but also its on set of gameplay mechanics to draw ideas from. Using ideas such as extra lives, power ups and levels could be fun.

The ‘Super Funston’ is the all new, all amazing games console! Each book is a different game being played on a Super Funston Console. 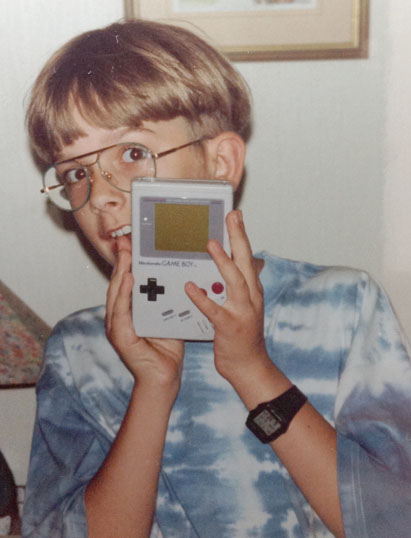