We are delighted to introduce new illustrator Emily Fox to our list, whose lively animal characters and gentle humour would be a stylish edition for any publisher looking for something fresh. Jonny Duddle has sold over one million books worldwide and ‘King of Space’ has been nominated for the 2014 Greenaway. ‘Gigantosaurus’ (Templar) is receiving fantastic reviews from bloggers and the book press. His ‘Pirates Next Door’, The Jolley Rogers are featuring in a new fully illustrated book for young readers called, ‘The Ghostly Galleon’ (Templar). Their adventures may be extended further with the exciting news of a potential animated TV series which is underway in Paris this year for Cyber Group. Alex T Smith has also been nominated for the 2014 Greenaway for ‘Claude in the Spotlight’ (Hodder) and shortlisted for The Surrey Libraries Children’s Book Award. ‘Claude in the Country’ was shortlisted for The Red House Children’s Book Award. In fact, Claude is so successful in books he’s thinking of transferring his skills to TV, with a possible animated series in development with the creatives at Sixteen South. Alex’s lovely illustrations for World Book Day were joined up with a nationwide tour of bookshops and schools and the publication of his latest book ‘Hector and the Big Bad Knight’ (Scholastic). Levi Pinfold followed his amazing Greenaway Medal win for ‘Black Dog’ (Templar) by winning the overall prize for Children’s Books in The Association of Illustrators Awards 2013. Adam Stower’s new book, ‘Troll and the Oliver’ (Templar) has received fantastic reviews and is shortlisted for The Sheffield Book Awards, The Peters Book of the Year Award and nominated for the 2014 Greenaway Medal. ‘Naughty Kitty!’ (Templar) won the Wanda Gag Award in the US and his collaboration with Alison Green on ‘What Can You Stack on the Back of a Yak’ was shortlisted for the Bishops Stortford Picture Book Award. He has illustrated a beautiful gift edition of Peter Hamilton’s first children’s fantasy novel, ‘Queen of Dreams’ (Doubleday), part of a trilogy not to be missed. Thomas Flintham’s work on ‘Marvellous Maths’ (Templar) was shortlisted for the Blue Peter Book Awards and his pop-up chemistry book ‘Molecule Mayhem!’ won the ALCS Educational Award. Thomas also has a brand new series of picture books for Scholastic, the first is a counting book, ‘One to Ten Animal Mayhem’. His beautiful illustrations and hand lettering for the cover of Piers Torday’s, ‘The Dark Wild’ (Quercus), is the follow up to the bestselling ‘The Last Wild’. Epic pop-up, ‘Story of Stars’ (Hodder) by Neal Layton has been shortlisted for the School Library Association Book Award and his collaboration with Cressida Cowell on ‘Emily Brown’ (Orchard), hits the stage this year. He has the exciting release of ‘Where The Bugaboo Lives’ (Walker), an interactive narrative letting the reader decide which way to go. And Neal also has a new series of baby books called ‘This is Me…’(Walker), publishing soon. Simon Bartram has written a great new book for all young football fans called ‘Up For The Cup’ (Templar) and his sixth title in the Bob and Barry’s Lunar Adventures series is out later in the year, titled ‘Curse of the Werefleas’. Kristyna Litten’s fifth picture book, ‘This Day in June’ (Magination Press), is a celebration of the Gay Pride movement and she has started working on exciting book projects for two American publishers. Her delightful artwork and hand lettering is also used on book covers for older readers. Chris Garbutt has completed a visual feast for Walker Books with his first picture book, ‘It’s a Groovy World Alfredo!’ Steve May landed his dream job illustrating his childhood hero, Dennis the Menace and Spike Gerrell has illustrated James Dawson’s tricky subject, ‘Being A Boy’ (Red Lemon). Aleksei Bitskoff has created a ‘Monster Party’ for Templar’s imprint, Pictura. Tomislav Tomic created absolutely beautiful illustrations for Andrew Lang’s ‘The Orange Fairy Book’ (The Folio Society). Alejandro Colucci and Christopher Gibbs have both worked on wonderful cover designs.

If you would like to talk to us, please call for expert advice on who to use for your next award winning book. 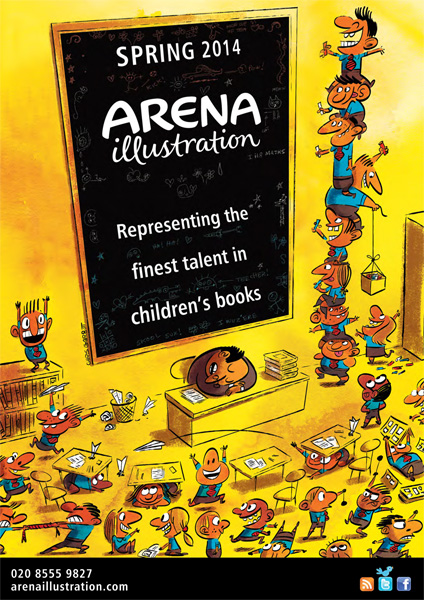